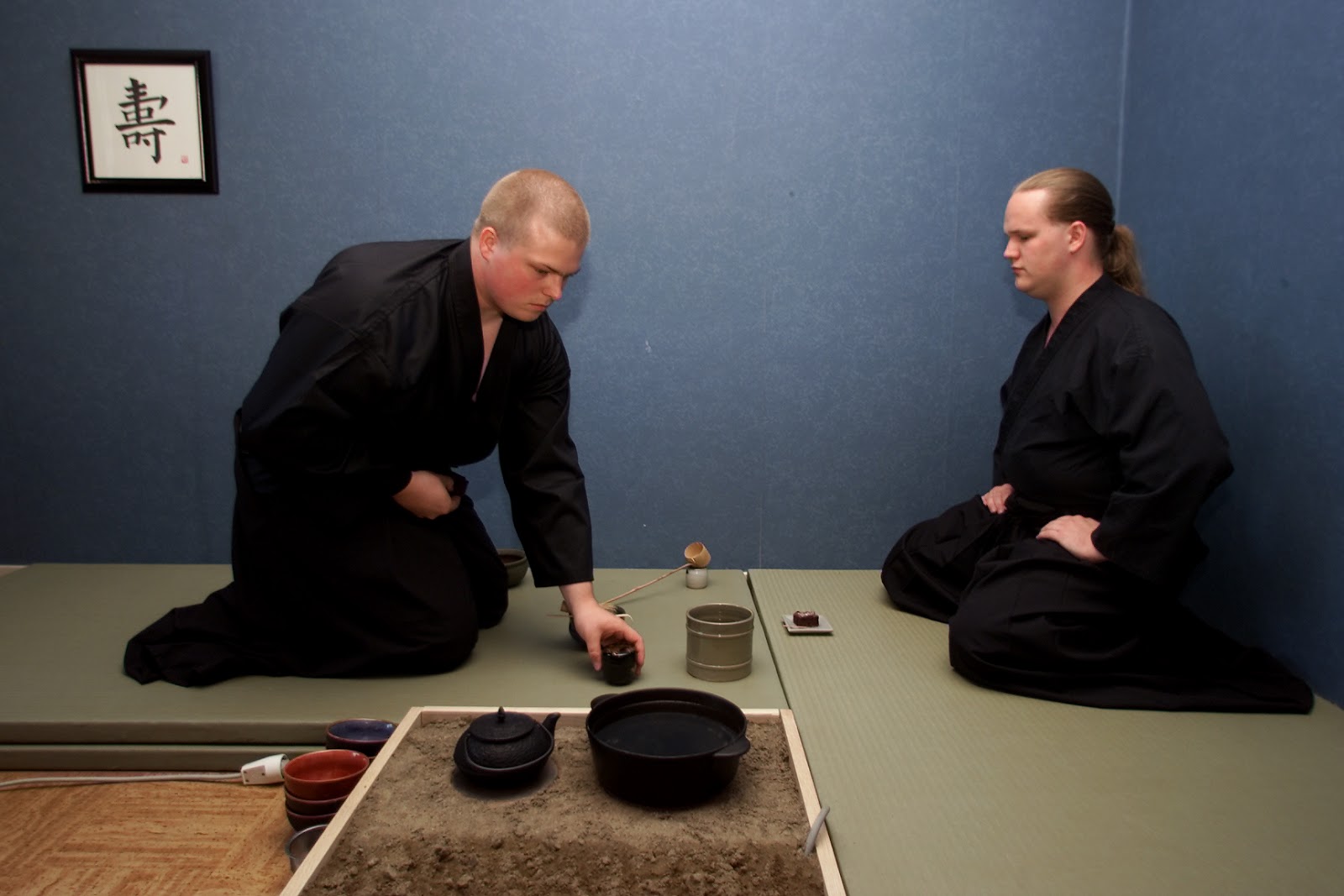 I have had a few different arrangements of Tea “rooms” or rather Tea spaces since I started learning the art. This post is an attempt to show the evolution of my Tea rooms. I hope you enjoy this trip trough my learning environments.

2001-2003, Nijo in my home-office
When I fist started with Tea I had just learned bits and pices from a friend. This was the Tea space I assembled using martial arts mats that I borrowed from the Aikido club. The Ro was a single electric cocker buried in sand do cover it up. As you can see from the image most of the utensils are also adaptations. Not knowing better I used a martial arts gi as outfit too. This image was taken for an article in a local newspaper.

2003  – 2004, Basement Yojohan in Oslo
This room was built in the basement of my mothers house. I did a lot of work removing a brick wall that was in the way. To room was 4.5 mats, however the association did not halv any half mats so one mat was both the fumikomi tatami and part of the mizuya. The walls were a soft of shoji-fusuma hybride. They consisted of a frame with white paper in the back. Because of the size of the room I had dogu storage area behind the bamboo screen, and a long and narrow mizuya on the other side.

While I studied in Midorikai I wanted to be able to study at “home” too. This was my very informal Tea space. Just a single tatami, and a okiro. This is where I practised all the higher temae that I was learning during the weekends. 2005 – 2007, Nijo-Nakaita in Oslo
I lived for a while in my dads basement. I had in the past wanted to build a Tea room here, so I had spent a lot of time digging away the old floor and removing dirt to increase the height. When doing this I never got around to building a Tea room because I moved. In the mean time my dad had further increased the height and installed a new tiled floor. In the corner of this room I built a two mat room with a separating board. The nakaita was a great addition to a two mat room. It both gave me the opportunity to lower the ro during winter, and also put some distance between the guest and the host.

This room had two white concrete walls (the walls of the room), and two fake mud walls. It had a proper nijiriguchi and a nice white sadoguchi. The fake mudwall was hinged so that the entire wall could be moved out of the way. That was great for students. They would be able to sit outside the Tea room an watch the lesson inside.

2007 – 2008, Nijo with nakaita, but no walls.
Eventually I moved away from my dads basement and into an apparment of my own. I replicated the floor structure of the previous room. But since this Tea space would sit in the middle of my livingroom I decided to not have any walls. So I ended up with a raised platform holding two tatami and a middle board. Actually I also used this platform as a dining place. I had a rug that fit perfectly ontop of it. When roled out the Tea-space looked like a weirdly raised dining area.

This platform was raised much higher than the previous one. I wanted to use the space underneath for dogu storage. I covered up the edge with cloth. Storing dogu under the room like this is great. However, I discovered that I would never bother to remove the tatami and the floorboard to access the dogu. I would always just crawl under to find the right box.

2011 – 2012, Nijo in the basement
When moving into a new house with my wife I had grand plans for a Tea room in the upstairs living-room  However I was never able to do that, and eventually all the dogu was moved down to the basement and a simple Tea space was established. To the left of the image all the boxes of utensils were stored.

2013, Yojohan with a small tokonoma and a nijo mizuya/entrance.
One day in february 2013 I found a store that could get me tatami of the proper size. From that sprang plans of a extensive upgrade to the basement Tea space. I’m almost done with the room, but some small details are still missing.

One Reply to “My Tea Rooms”