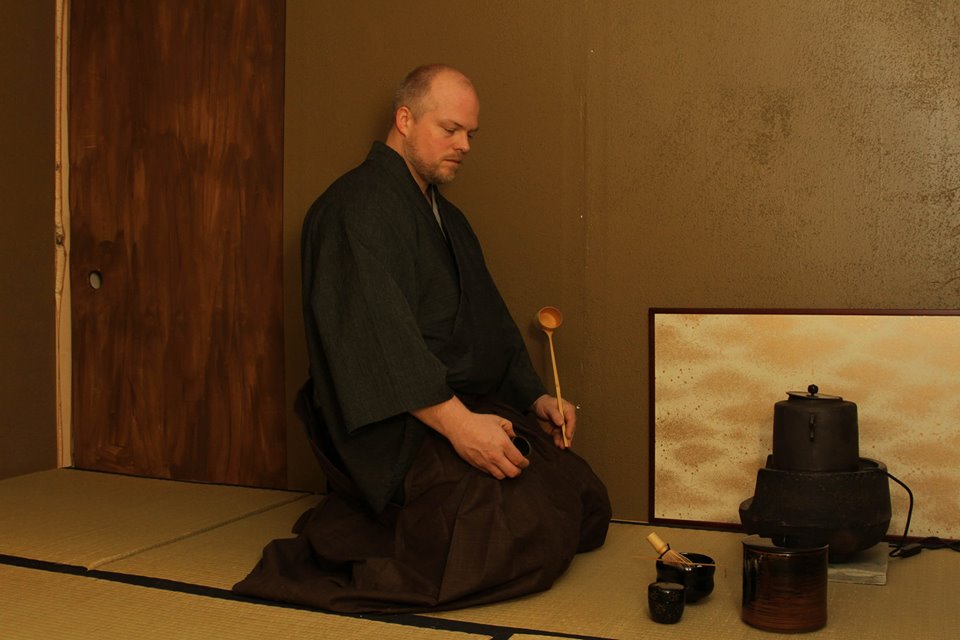 Though our podcast, TeaLife.Audio, I got in contact with a teacher for the Ueda Soko Ryu of Tea. I have wanted to learn more about the warrior type of Tea since forever. Early in November Adam came to Norway to teach Stig and I Ueda style of Tea.

Before this weekend I had very litle knowledge of the Ueda school, most of what I knew came from our discussion with Adam in episode 44 of TeaLife Audio and the tea duet. Adam came on a Thursday early in November. We started the tea weekend with him serving us usucha, and I was stunned at all the differences. I had seen some of the differences in the aforementioned YouTube video, but once I saw it live I saw so many more differences. The order of the temae is identical to Urasenke, enter the rom, purify natsume then chashaku, clean chawan, make tea and clean up in reverse. enters the tea room, just by the
placement of the mizusashi and the bow in the door. In this case you can see the different even as the door is opened. The way the door i pushed open is distinctly
different in Ueda Ryu. Right hand opens the door the first few centimetre, just as in Urasenke, but then the door is pushed open holding your left hand flatt in a cutting motion parallel to the floor.

There are too many difference to go though all of them, but two very distinct ones are the folding of fukusa and holding hishaku in a resting position. The resting position can bee seen in the photos included in this post.

During the weekend we recorded three episodes of TeaLife Audio. These will be episodes 48, 49 and 50.

During the weekend I got to see a few great temaes, and do some my self. I enjoyed the way Tabidansu is handled in Ueda Ryu. The middle shelf is taken all the way out and placed on the upper shelf. That way you have much easier access to the mizusashi.

We concluded the weekend by having a chaji that we jokingly called two-host-no-guest. During this chaji we did Urasenke style tsubo kazari, showing off the storage teajar. Then we opened up the jar that had been sealed up since my hatsudate early in 2016. Adam selected the koicha he wanted to drink. I poured out usucha and found the selected koicha, as shown on the photo underneath.

After resealing the chatsubo we exited the tea room and took turns grinding the koicha and having our meal. Once we had enough koicha we headed back to the tea room and I did Ueda style koicha followed by Adam doing Ueda style usucha. I enjoyed the event very much.

More photos from the weekend 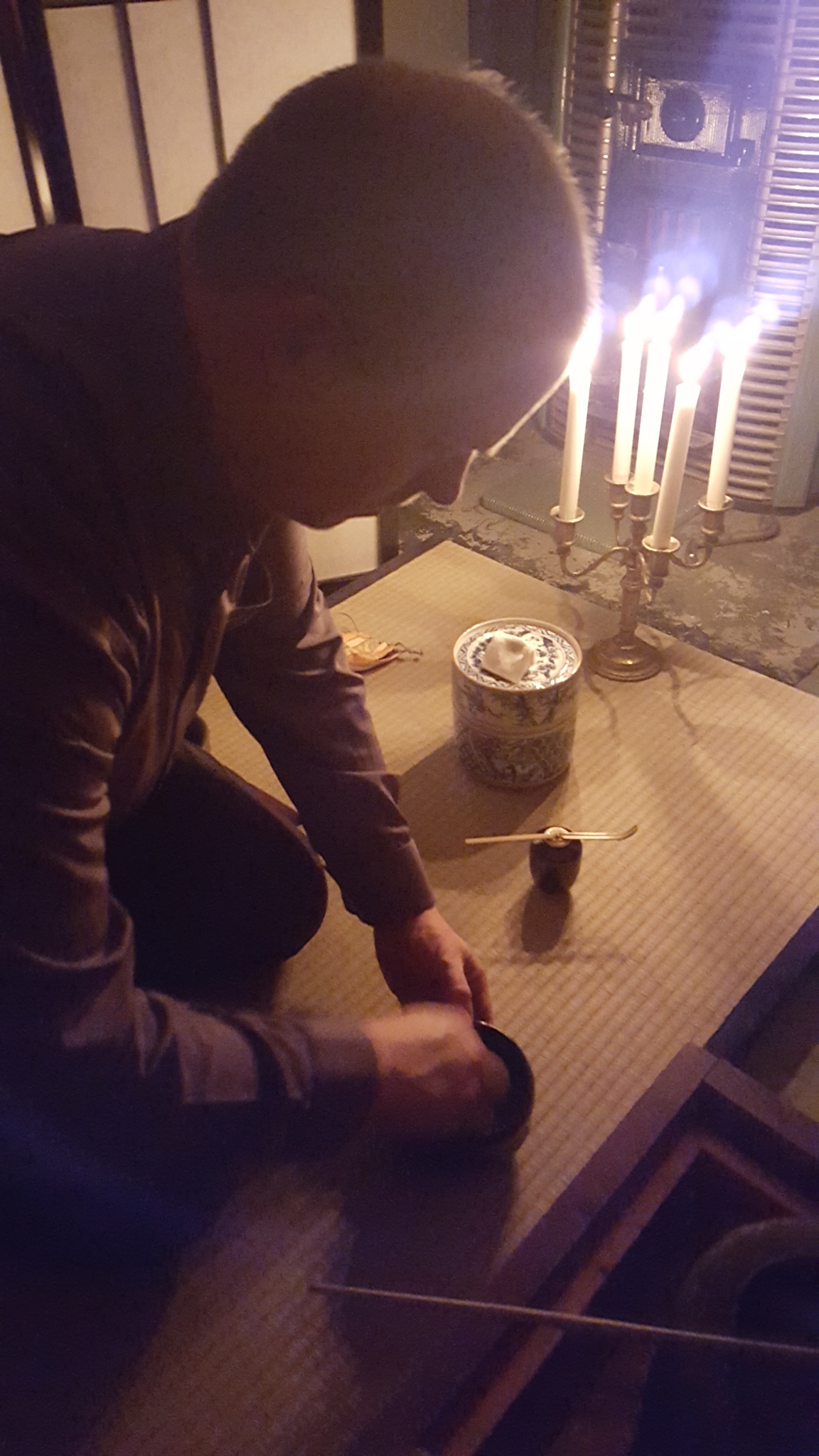 I wish you all a happy new year! I enjoyed this year´s last bowl of tea with my wife by candlelight. 2015 was the very first year I had the opportunity to do temae every single day, lets hope 2016 offers the same opportunity.

From my place next to the crackling fireplace I see the tree naked but for a few rain soaked leaves framed against a grey sky. With the lingering taste of tea still in my mouth, I’m anticipating opening the ro tomorrow, and starting a new season of Tea.

At the last day of the season I’m considering what I did and didn’t do during the season that has passed. The one Tea-thing that I most regret, is that I neither hosted nor attended any Tea events during the furo season. On the other hand, I did temae every single day, and my students did a total of 42 temae. In addition we made 13 regular and 9 dictionary episodes of TeaLife.Audio podcast.

Looking at my temae-record early in October I noticed that I had done quite a few temae nine times, and for no reason in particular I decided to see how many temae I would be able to do nine times during the season. It is odd, I can still remember the years that I struggled to do each temae just once during a season, and this season I have done 12 temae nine times, and I have done 28 temae once or more. I’m blessed to be able to do Tea so often.

I have read somewhere that writing down your goals make you much more likely to reach them. For the upcoming season my goals are to do temae every single day, host weekly keiko, build a table for ryurei, host hatsugama and at least one more event. 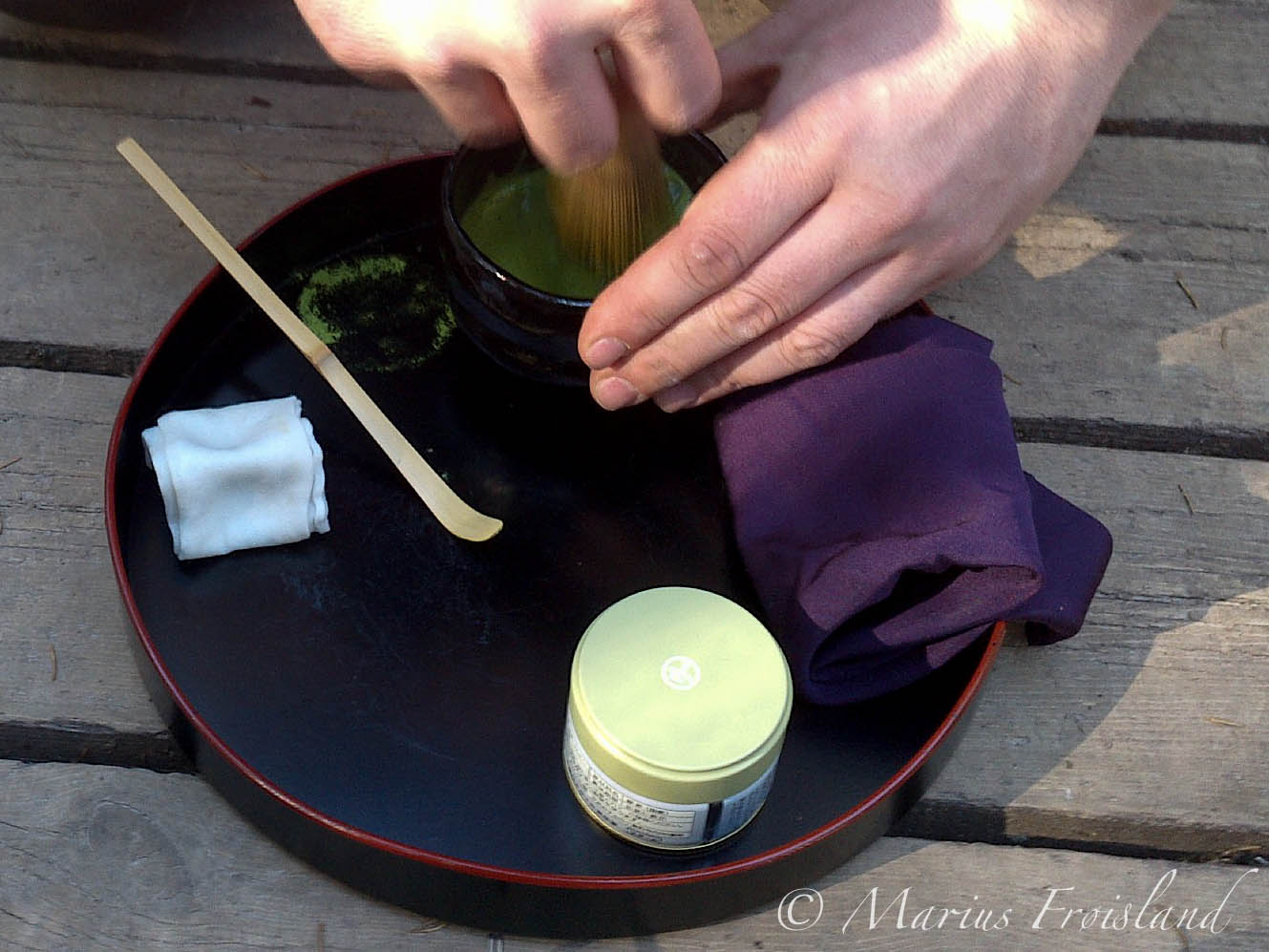 Back in 2009, I wrote a post titled Why begin with Ryakubon. Here, I wondered whether it would not be better for new students to start learning Irekodate instead of the traditional Ryakubon. The ease of transition from Irekote to Hakobi, and my own experience of starting with Hakobi usucha were my main reasons for preferring Irekodate as a starting point. Now I’m actually considering taking on some new students, and this made me reconsider the topic. Earlier this year, I timed most of my teamaes for a while. I found that Ryakubon takes me 7 minutes to perform, while Irekodate takes 15 minutes. I was very surprised that Irekodate takes twice as long. I always imagined the difference to be much less.

I also made a rough list of the main warigeiko topics related to each of the temaes. This was just a way for me to compare the complexity of the temae. As you can see from my list, Irekodata has almost twice as many warigeiko points as Ryakubon.

These findings convinced me that there are good reasons to start with Ryakubon. I decided to stick to this traditional startingpoint for learning Tea, and I will start new students off with Ryakubon. 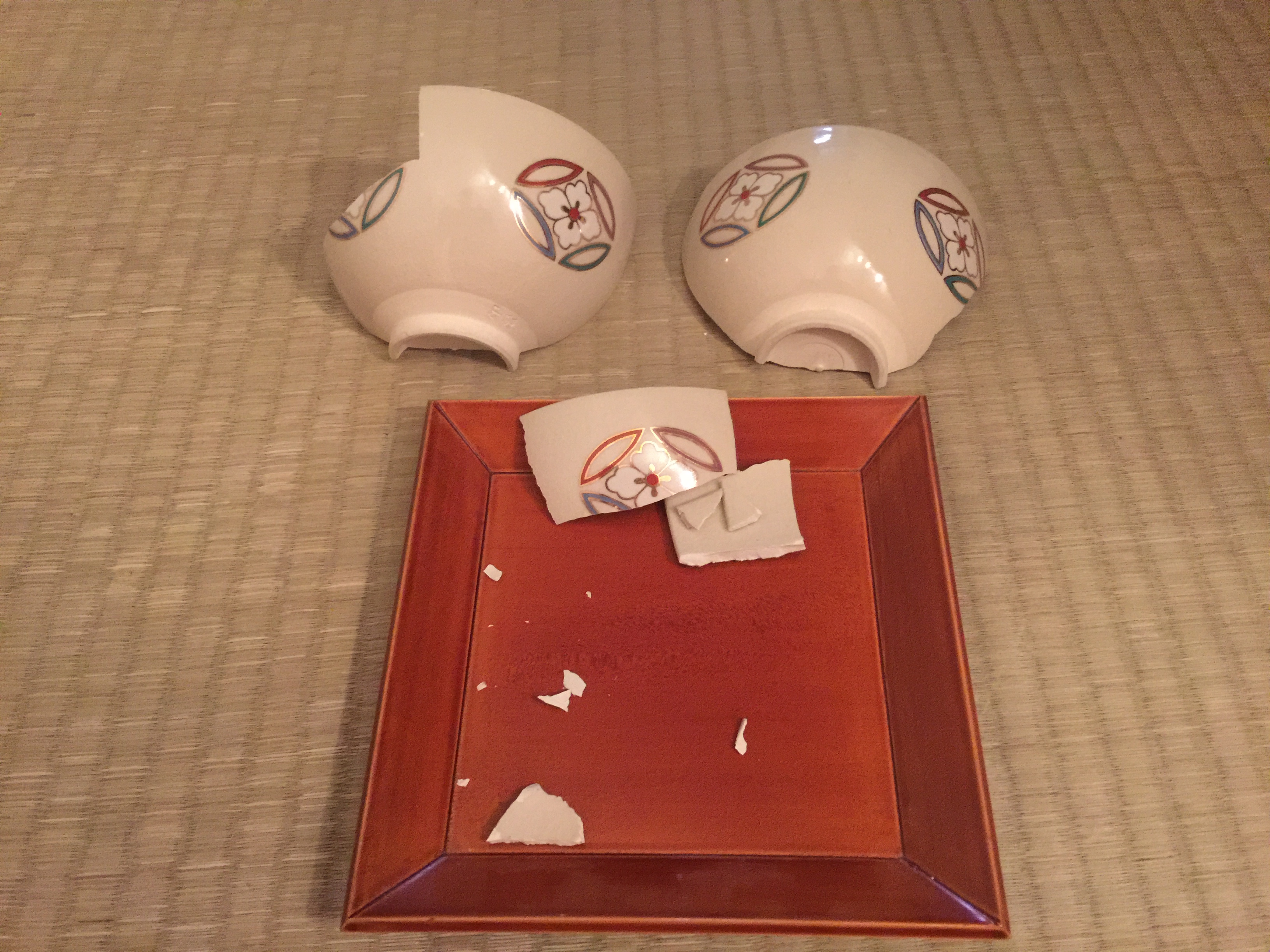 Last week, I reached a new milestone in my morning tea project – I have now done temae 200 days in a row. I did not do anything special for this day, but I did have an accident instead. While I was taking the koicha tea bowl off the shelf, I managed to bump it into another Tea bowl that came tumbling out of the shelf and crashed into my freshwater container. So, in addition to a broken Tea bowl, I also now have a mizusashi with some awful scratches on the lid.

Actually, I won´t be doing kin-tsugi, but rather “tin”-tsugi since I’m using tin and not gold to do the repair (gold was too expensive for my very first try at this technique). Tin will give the end product a look like highly polished silver.

We talked a little bit about Tea repair in one of our podcasts, and there are some pictures here if you want to see the technique in use. My Tea teacher, who is also a co-host on the podcast, has some experience with Tea repair (the pictures I linked to are all his projects). So I talked to him, to get some advise and to figure out what equipment I would need.

I ordered all the necessary items from the Watanabe web page. I ordered A01, A03, B06, F01, F03, F13, K53, and E02 – I hope that is all I need. It was easy to order, I just e-mailed them the list of products that I wanted, gave them my address and said I wanted to pay with PayPal. The very next day I got a invoice,  and hopefully soon I will have the utensils 🙂

I will be posting my progress under the label. Just click the link and you’ll find all the posts

A step by step guide: 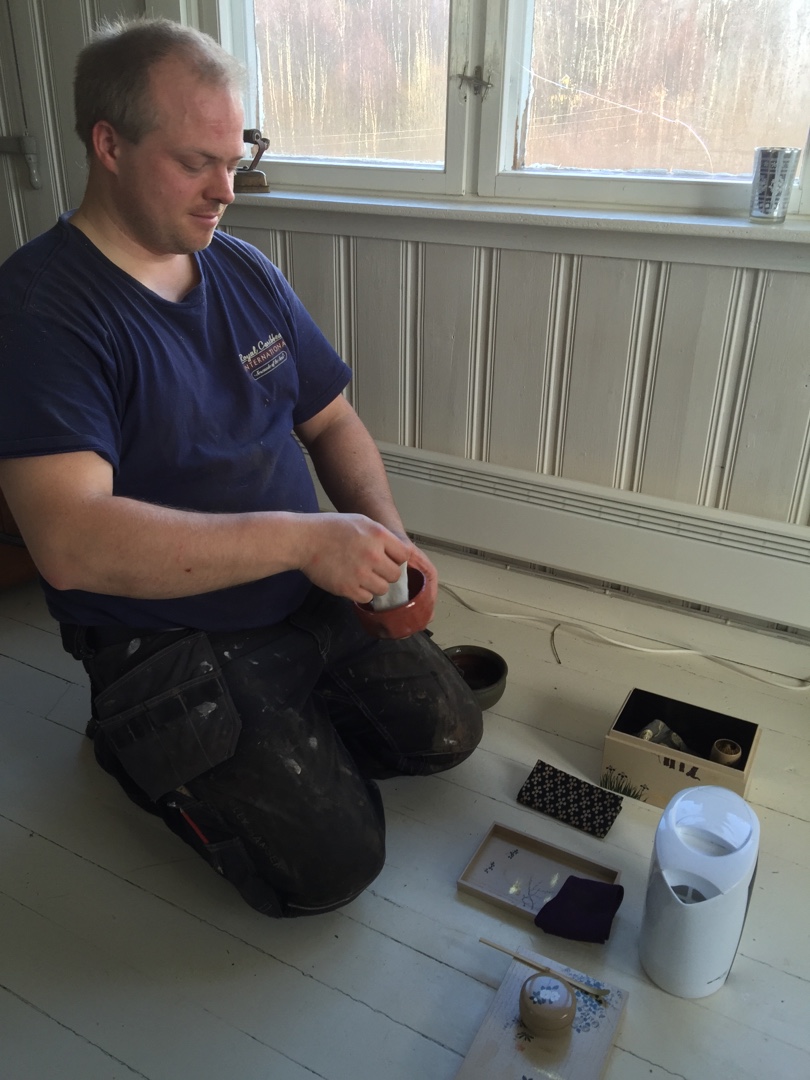 Taking a quick Tea break, before I go back to bulding my Tea hut (more on that later). Today was the 150th day in a row that I did temae, which is a new record for me!:)
Happy Easter to you all! I arranged Hatsugama for three friends in my yojo-han. This was a nice gathering. My old teacher travelled in from a town about an hour away to participate. It was great to catch up with him again. Due to the distance between our homes, we meet all to seldom. But that in turn made this Tea ceremony all the more special.

I started in my new job February 3rd. I had been looking for a new job for a while, and was very excited to finally be able to start at the new place. To commemorate the event, I bought a special chawan. In the morning before going to the office for the very first time, my wife and I shared a bowl of koicha using this chawan. My wife was also considerate enough to buy me a specail Tea bowl for this occasion, but I didn’t bother to use it. (PS. In case you wondered, whenever the content is not too full of errors, it is because I have forced my wife to edit the text. Sometimes she also make some changes 😉 )

I’m no fan of Valentine´s day, mostly because it is an imported tradition, but any way I surprised my wife with an impromptu tea gathering in the morning. I had spread rose petals in tokonoma and chosen special sweets. Definitely the best Valentine´s celebration I ever arranged.

In June, an old friend from Australia came to visit me. We shared a bowl of Tea – which happened to also be my 1024th (1K for computer geeks) temae. We had not met in several years, so we also found time to reminisced about our old adventures together.

Later in the year, I did Tea outdoors in several mountain locations. All of them memorable for their own reasons. The most special one was at Dovre. We had excellent weather during our camping trip, and before heading home I wanted to record a Tea in unusable places video. I found a nice location and started making Tea. As I was scooping the Tea out of the natsume, all the Tea blew off the chashaku. Maybe I’ll make a bloopers version based on that event. 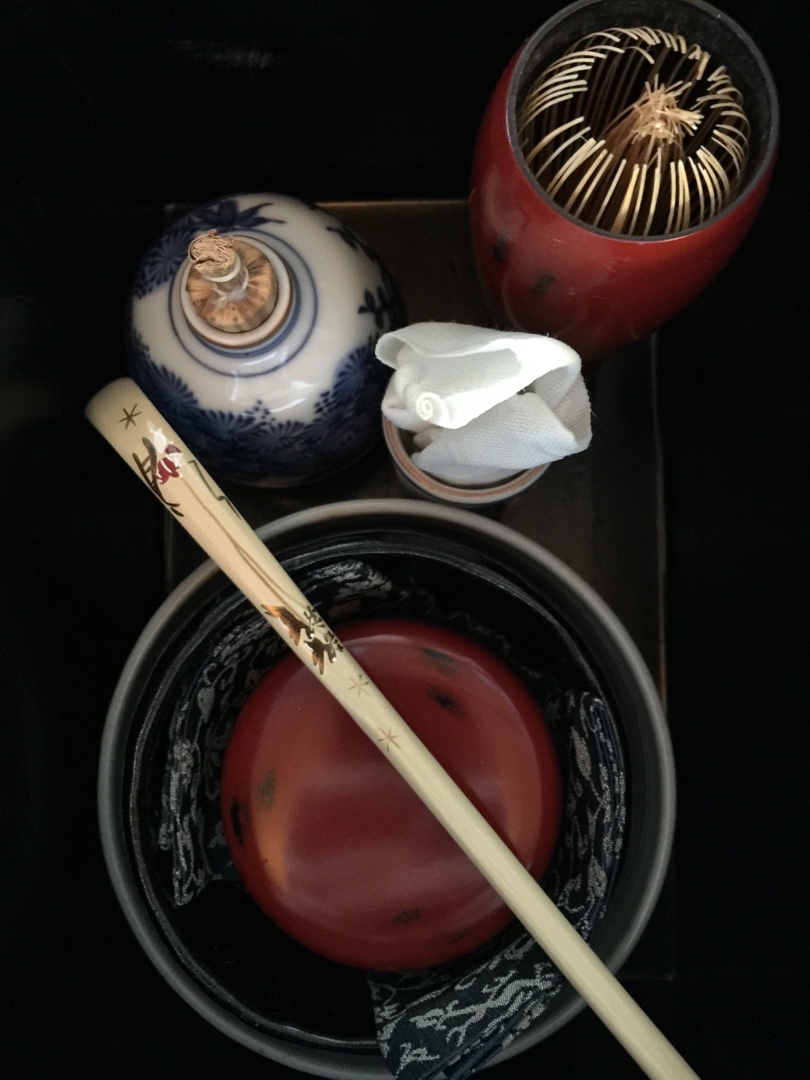 I wish you all a Merry Christmas and a happy new year!

Today I enjoyed morning tea with a brand new chashaku. The chashaku was an early Christmas present from my wife. When I wrote the post Mizuya Hygiene in June I thought a lot about what my practice in the mizu-ya. In the aftermath I made one adjustment to my practice. I used to take the kettle straight from temae-za to the sink, where i emptied it. I than place it back on the heater, to dry untill I was ready to leave the tea. My thinking was that this way the kettle got the absolute maximum time on the heater to dry.

Writing the hygiene post got me thinking, and I decided to try something different. I now bring the kettle from the tea room to mizu-ya. I use the hot water to clean chakin, chasen and chawan. I leave the chakin in the chakin-arai and pour hot water onto the most dirty part until it returns to it’s usual white. The chasen I leave in the chawan, and fill the bowl with water. Then I give the chasen a quick wisk. Most times there is no tea what so ever left on it after that. But sometimes I have to use my fingers to get of the rest.

Doing it this way requires much less scrubbing and manual cleaning of the utensils. By using water that is near boiling I guess I also kill off some extra bacterias that would have survived with my previous cold water strategy. 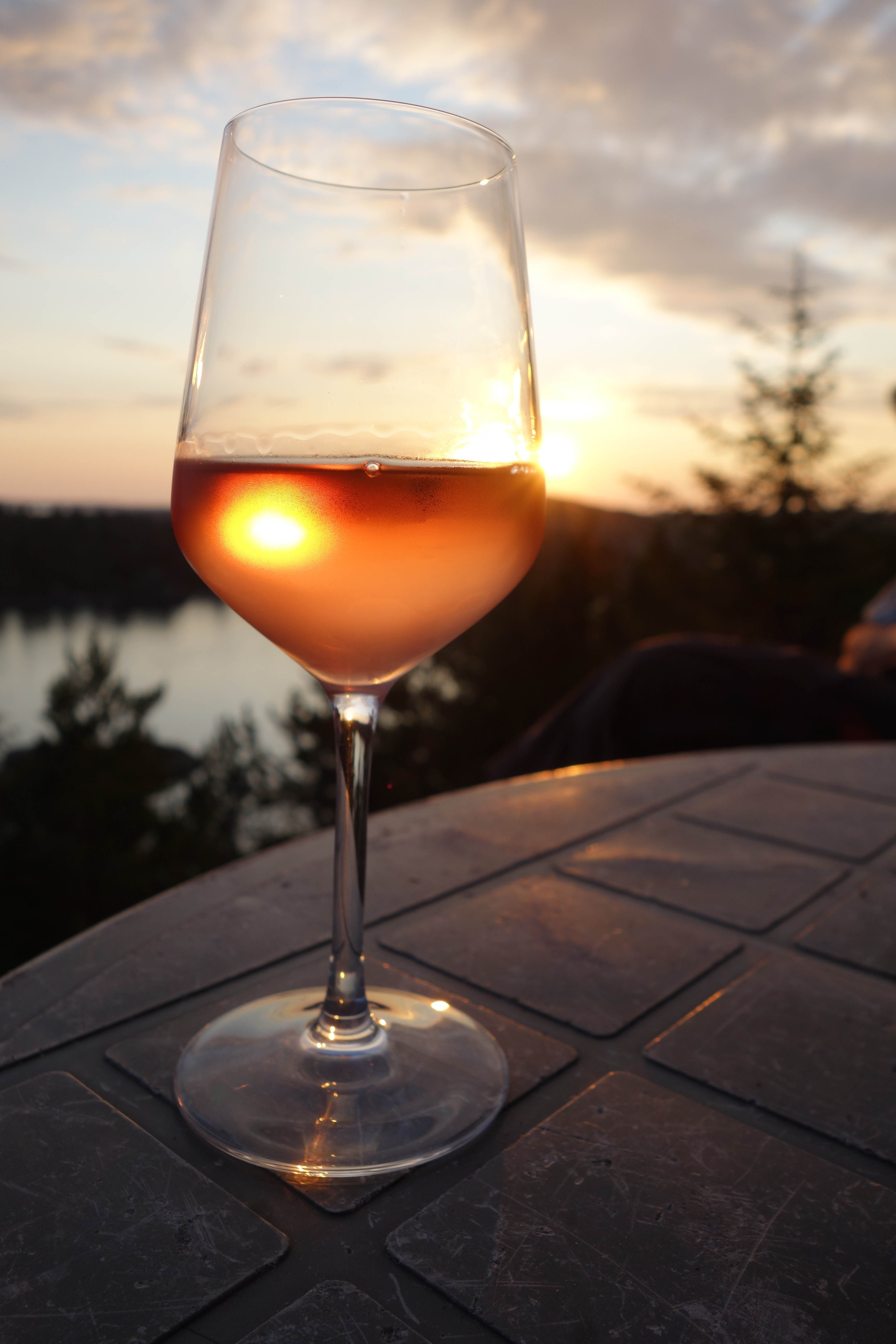