A while back, I noticed that I had just performed my 1.000th temae. Since I didn’t notice this ahead of time, I didn’t do anything special for the occasion. To remedy that, I wanted to do something for the 1.024th temae instead. If you’re not a computer geek, and wonder why 1.024 is a special number, have a look at the last section of this post.

When I decided to celebrate my 1.024th temae, I counted forward based on the idea of doing one temae a day. By perfect alignment of the stars and a portion of good karma, my 1.024th temae would be on the day my senpai from Australia would come visit. A perfect occasion!! I had to forgo morning tea that day to enjoy my 1.024th temae with her.

During my Midorikai stay, Wendy was doing her second year at Midorikai. Even with a slight age difference, we became good friends. She helped me learn some of the teamae I was not able to study during the regular classes, and she introduced me to a kimono- and Tea teacher. She is touring the world, and as it happened was in Norway this auspicious day 😉

As you might know, when you invite someone to a Tea ceremony, you traditionally try to choose dogu that have special meaning for your guest. With that in mind; I picked a chaire one a mutual friend (the kimono- and Tea teacher Wendy introduced me to) had helped buy. I used my commemorate Tea bowl because it is the most special bowl I have.

Also, I put my chatsubo on display, because Wendy was with me in Japan when I purchased it. I have never used it for anything before, I just had a irrational wish to own one after reading about how the Tea masters of old valued their chatsubos. A chatsuboto is used to store Tea leaves between the harvest and when you start making Tea from the leaves. So it wasn’t part of the ceremony as such, but rather as part of the ornament.

After Tea, we enjoyed some Norwegian moose meat, french and italian wine and a lot of good conversation. It was great to catch up with my friend from down under.

First of all you need to know that I’m a computer person. It is my profession and one of my passions. In the world of computers, everything is either power on or power off. Power on is represented by the number 1, while power off is the number 0. This gives rise to the binary number system: Instead of using the numbers from 0-9, computers only use the numbers 0 and 1. 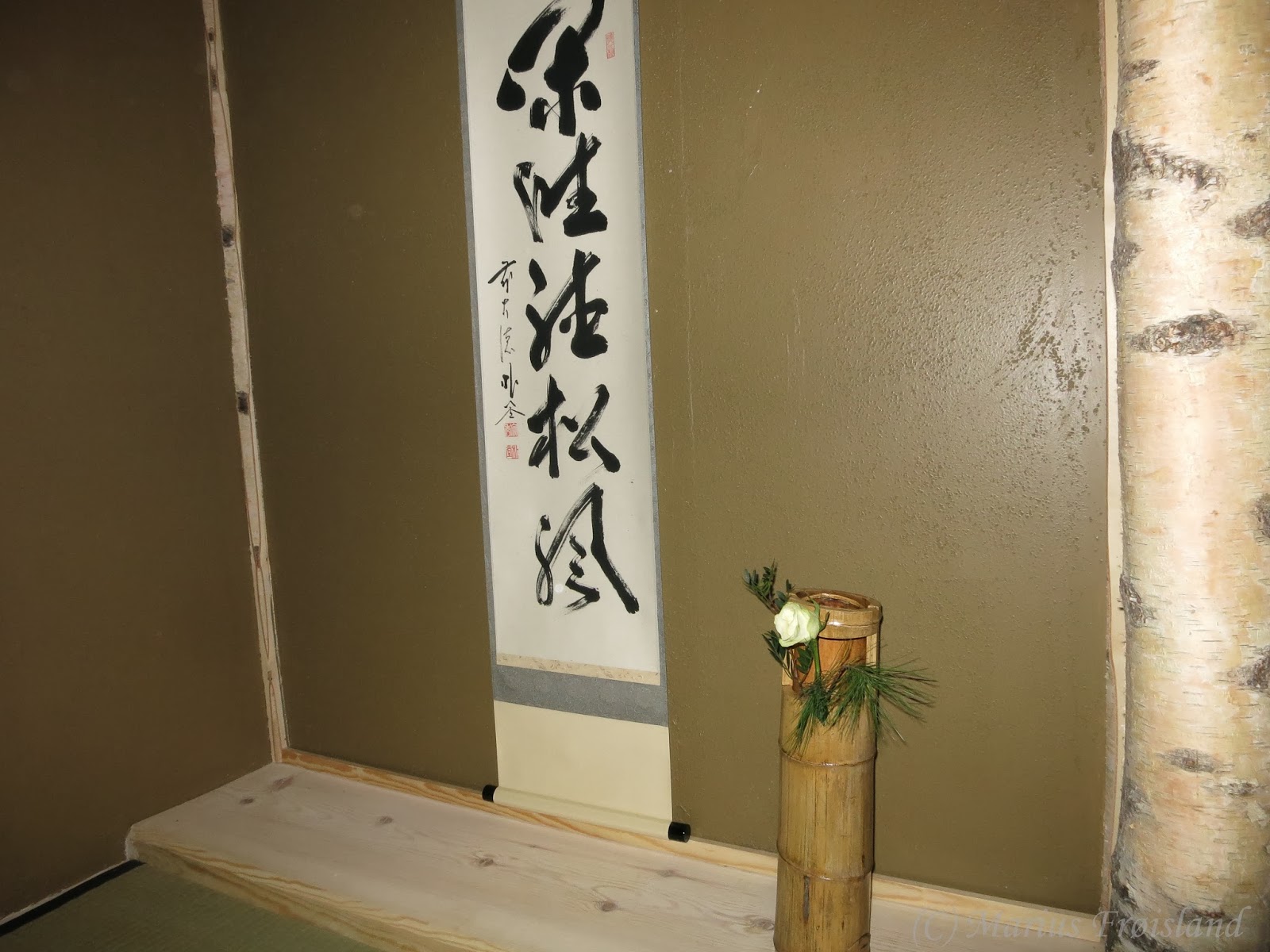 5th of January I held Hatsugama, the first kettle of tea. I had invited five friends, but unfortunately two was unable to attend due to some emergency overtime at their company. A small meal was served first, then koicha. I enjoyed the event, and hope that the guest did too.
These are some photos from the event. Unfortunately I forgot to sneak a photo of the guests. 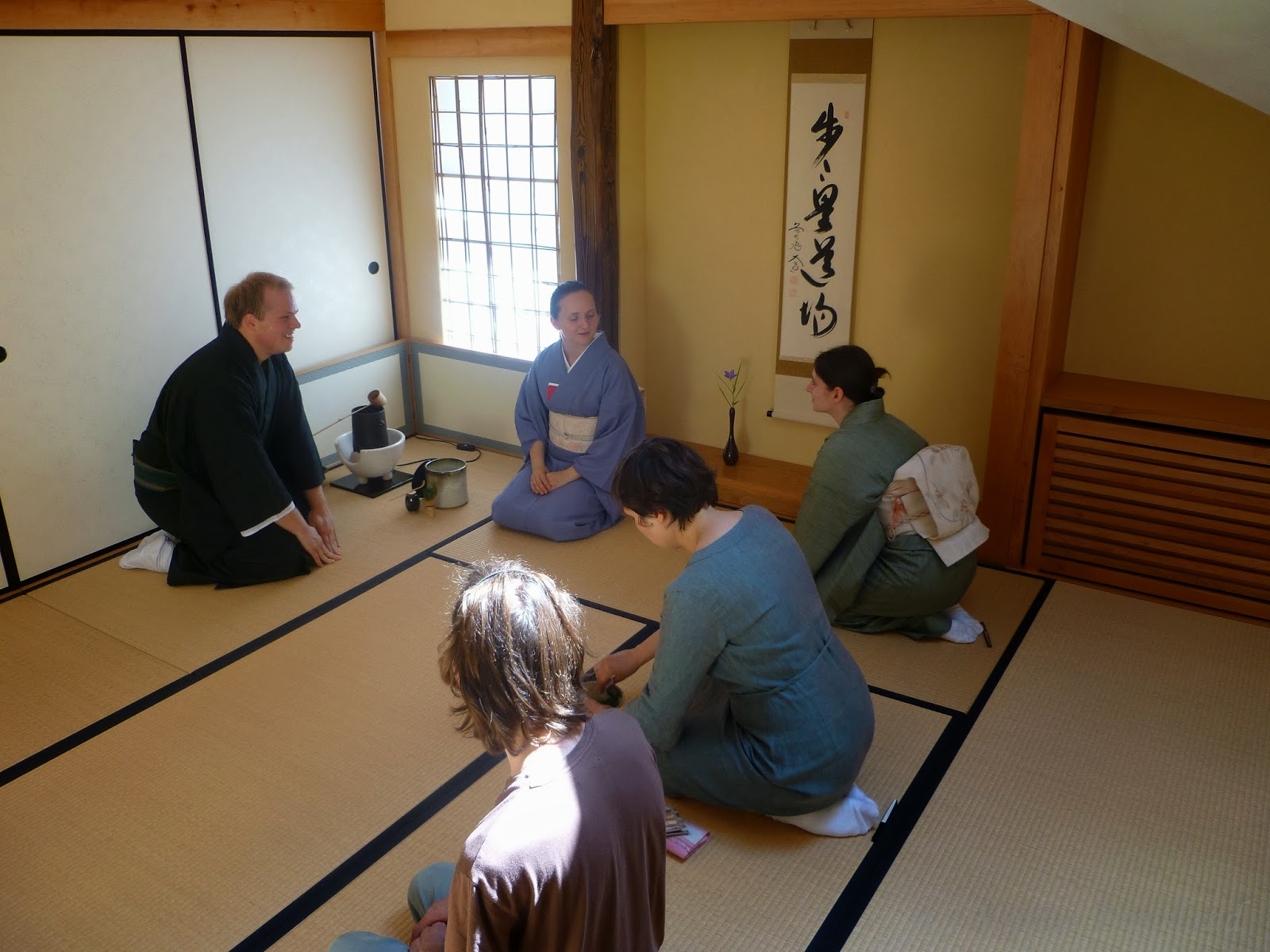 I never feel more out of place than when I do not know the rules or expectation of a setting. Therefore I will try to give a short introduction to being a guest at a koicha event. Just as singing you can’t learn tea by reading, but you can be a bit more prepared. The purpose of this post is just give you a quick overview of what to expect, and the basic social conventions of a koicha gathering.

Remove all rings before entering the room. They may damage the tea-bowl and other items you will be handling.

There are a few items that you might find useful to bring.

The host might have placed some of these utensils outside the tea-room where you can easily find them. These are intended for your use if you have forgotten or do not have them yourself.

The order the guest enters the room in is significance. This decides their order for the event; first guest, second guest, …, last guest. In the most formal events the invitation will state which number you are. If it didn’t then it is up to the guests the decide among them selves. As a rule of thumb let the most experienced be the first guest, and let the second most experienced be the last guest.

Upon entering the room each guest will have an opportunity to look at the alcove, and then at the kettle. After all guests are seated the host will serve a sweet. Each guest should take one sweet and pass the container on to the next guest. The last guest will place the sweet container in front of the hosts door. The sweet should then be eaten immediately.

While the host prepares the tea there should be no talking. The first words spoken should be the host asking the first guest how the tea was. Once the tea is done and the tea-bowl is placed out by the host the first guest move over to it and brings it back to his seat. The bowl is places between first and second guests and all the guest bows together. First guest then place the bowl on his left palm supporting with right he lifts it in appreciation, and then turns it slightly to avoid drinking from the front. He takes one sip. Then the host will ask if the tea was ok. The first guest keeps the bowl on his left hand, and puts right hand in front of him in a bow and replies. Then the first guest takes two more sips.
Once finished he places the bowl on the mat in front of him and uses a small paper napkin to wipe of where his lips touched the bowl. He then picks up the bowl and turn half way towards the next guest. The next guest also turn half way towards the first guest. The bowl is passed between the two guests, from hands to hands. Both turn back to face forward again. Then there is a bow between the first and the second guest. The second guest bows holding the tea bowl in both hands. The second guest does all the first guest did except the host will not be asking about the tea. Lift in appreciation, take three sips, wipes of the bowl and passes it on to the guest after you. This continues until the last guest. Meanwhile the first guest will ask the host about the tea and the sweets. The last guest will try wipe the inside of the bowl. The goal is not the remove all the remaining the, but make sure that at least half way down the sides are clean.

Once the bowl is returned to the host there is a bow with the host and all guests. Now the first guest may ask questions about all the items being used. One variation that is not uncommon is to use two tea-bowls if there are many guests. Then the host will tell how many guests he intend the first bowl for and make a second one for the rest. The only changes is that instead of the last guest cleaning the bowl and bringing it to the first guest it is the last person drinking from that bowl that does it. Also the first person drinking from the second bowl has to go fetch it himself. Other than that it is all the same. All guests gets to look at both bowls. The last guest and the first guest will meet twice in front of where the bowls are placed by the host. Once for the first (main) tea-bowl and once for the second tea-bow. 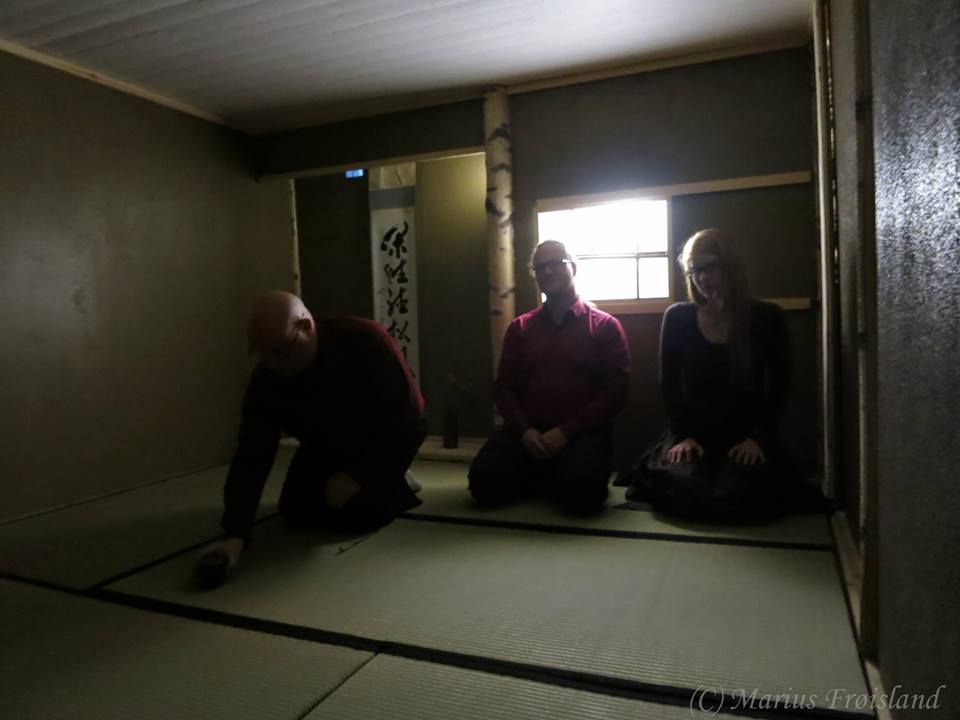 I have written many posts about the construction of the Tea-room. This saturday I held the very first chakai in my new room. In advance of that I had to make a new door, again! Still it is some way off perfect, but it works (somewhat).

Seven guests came to have Tea. I divided them into two

“seki” orseatings.With four in the first and three in the second. I served thin Tea, using a Tabidansu. For expedience I had a extraTea-bowls hidden in the tabidansu. That way I could start preparing the Tea for the next guest as the first guest was drinking and looking at the bowl. It worked out nicely.

In the tokonoma I had a simple flower arrangement. I wanted it to have autumn colors, but that was hard to come by. As the leaves hasn’t started changing color, and the flower shop was all about pink and white.
One thing that I became aware of was that it was a bit too dark. I should at least have a light window lower in the tokonoma wall so that the flower are illuminated. So that might be my winter project. I might do with a bit more light overall.
Along with the flower I hang my favourit scroll, Kansashite-shofu-o-kiku. Sitting quietly

listening to the wind in the pines. I love this saying, as it so fully capture what Tea means for me.

For sweets I had made koshi-an and wrapped it in a steamed dough. One of the guests fiance had thought my wife to make that dough for a Philippine dish called sipao, which reminded me a lot of the Japanese “man”. So I though it a nice sweet, but it became a bit larger than anticipated.

All in all I feel it was a successful first chakai.