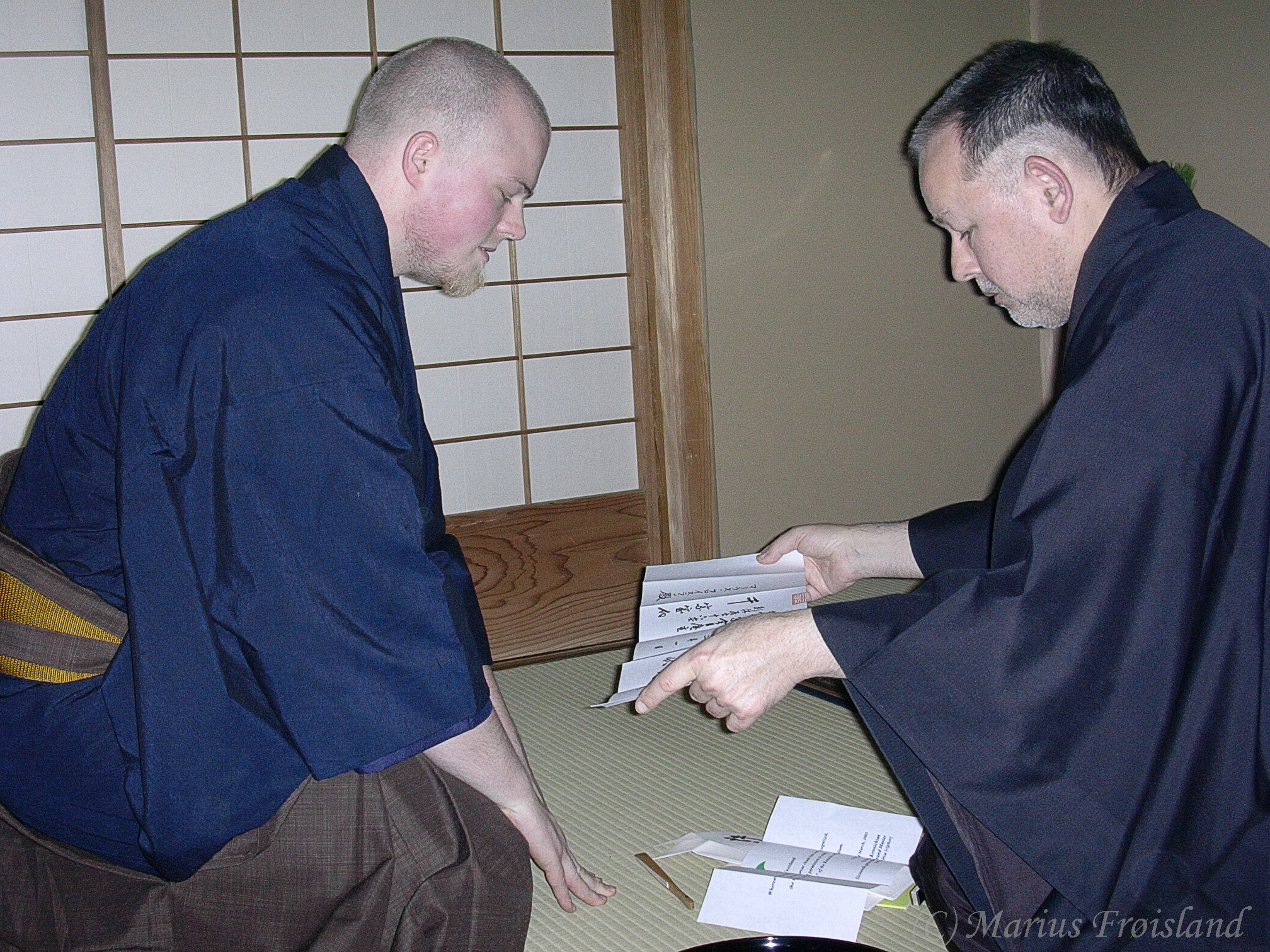 I had studied Tea for two-three years before I heard anything about kyojo, since then I have heard a lot of different opinions and view about them. I’ll discuss a few of them in this post.Concept
Kyojo is a permission to study a certain group of temae. Nyumon encompass the first temae each student is thought. Logically you should be given this kyojo upon your enrollment for a Tea class. To this day I have never heard of anyone receiving this before starting to learn. Most people that I have talked to have received Nyumon, Chabako and Konarai as a group when they are about ready to start learning the Konarai temae. I my self received them only after having studyed both Chabako and Konarai for a while.Permission to study and/or proof of achievement
I think everybody are familiar with the belt system of the many different martial arts. In most you will have a grading, which take place at one of your clubs events. All the members of club are welcome to attend and watch as you prove that you are worthy of the next grade.
I have heard that some teachers do a similar thing for Tea. I was told by my teacher that he would watch the Shikaden temae I was about to perform and decide whether or not I was ready/worthy of the Okuden kyojo. Others have a test where the student must be prepared to do any of the Konarai, and they will draw one or two on random like an exam.
From what I have witnessed I conclude that even if the true meaning of kyojo is a permission to study it also infers a proof of achievements to a certain degree. You even get a nice calligraphy that you can hang on your wall to display your achievements.There is more than one way to obtain a kyojo.
Ideally I assume that you would be given a kyojo at the point in time when your teacher deems you ready to start learning the more advanced temae. There is a lot of buts with this, especially for people outside Japan. I’ll talk about some of them later on. Here is a few different ways you might obtain a kyojo:

Maybe you can just ask your teacher kindly if he or she thinks you are ready for the next kyojo. In places with out a local teacher you may not be allowed to make this request yourself, it is the president of the local association that must request it for you. This was the case when I got my Shikaden kyojo.

Some people has gotten their kyojo by requesting it directly from Oiemoto or Daisosho because all other methods failed. The request was probably done through Kokusaibu.

You could be at a party with a high ranking official were the topic of kyojo is brought up by one student who was dissatisfied with her kyojo level in relation to the long time she had studdied. The official my than utter the words “Every body up one level.” followed by a stern look at the Tea teacher that happened to be at the same party. Sounds unreal right? Well it’s the way I got Nyumon, Chabako and Konarai. We had requested it from our teacher, but no progress had been made until the party.

There are rumors about teachers who push kyojo on their student once a year, or the minimum interval. You ask, why would a teacher do that? Greed! You probably know that there is a fee associated with the kyojo. A significant amount of that fee is for the teacher. So the teacher has economical reasons for doing this. Up the same alley of greed are the rumors that some “teachers” let students just buy the kyojo with out studying.

According to rumors some people are bestowed a kyojo of the highest level as an honor, much like an honorary doctor at a university. When I heard about this I did not like it, but the more I think about it the more I realize that this is very much in line with the principle that kyojo are permission to study and to prof of achievements.

The use of kyojo

Kyojo is a permission to study a group of temae, from this I logically conclude that if you do not have the kyojo you should not be allowed to study the temae. This logic gets very iffy with Nyumon, but I have certainly heard it practiced with Shikaden.When are you studying a temae? Tea students are practiced in learning by watching their fellow students do temae. There is a commonly used expression kengaku which means to study by watching. So are you studying a temae by watching your sempai do it? I have witnessed three distinctly different views on this:

Yes! You may be asked to leave the room when they are doing the temaes you do not have permissions to learn. I have seen this practiced with Shikaden and Okuden, but never with the lower temae. I guess there is no point in preventing a student from seeing a particular temae when that same students can buy a book or video showing the temae in great details.

No! It is just plainly impractical to ask students to leave the room while their sempai does a temae. Not to mention who are you going to handle this if you only have one or two students with the kyojo. You’d probably want one of them being the host, the other to prepare for next temae, who then will be the guests?

Who cares? Some teachers will teach you any temae as long as you pay the lesson fee and have the necessare knowledge/skill. Usually that means you must be able to do the lower temaes with only minor mistakes, and you already know the major points of the new temae.

As mentioned I have witnessed all these. I have been asked to leave the Tea-room while my sempai did Shikaden, but I have also been invited back to the same room to fill the role as guest because they ran out of people. And I have found teachers and sempais that thought me Shikaden  and Okuden long before I got the kyojo for it.

Tagged along with the kyojo are a set of other permissions and licenses. Namely Hikitsugi, Sei-Hikitsugi, Chamei and Monkyo. Especially the first two are troublesome in use. They are the assisting teacher and teacher license. I guess that all but the most fortunate of Tea-students have at some point or another been to classes thought by their sempais, most of which did not have the licenses. I know I did. My first teacher was not licensed. I started teaching even before I knew what kyojo was, which was probably not the best of idead but there was no one else that could do it.

Conclusion
Personally I like the kyojo, they give me a sense of achievements. When I was a new student they gave me something to strive for. The secret temaes were very exciting to learn, as you had to puzzle the information together from what different teachers and sempai told you. However, I wish they kyojo was officially treated as token of achievements. Because today I feel they are related to achievements and not to permission, but the official policy is the opposite.Publish Post