When answering my survey, a reader asked why I keep changing the temae rather than repeating the same one until I’ve mastered it. There are a couple of reasons for this.

Since I’ve started keeping records of all the temae I do, I have wanted to try to perform every teamae at least once each season. A quick glance at the table on the right, reveals that I have a ways to go with this endeavor. The DSL (Days since I last did this temae) column shows that there are 11 temae that I have not performed for over five hundred days! Most of these I have neglected for good reasons, such as that they require too many participants etc.

If we ignore those “long forgotten” temae,  I am proud to say I met my goal of having done the rest of the temae at least once during Ro season. Prior to 2013, I only did Tea a few times each season. With 32 different temaes, it stands to reason that there was no way I could repeat any single one many times if I were to have the slighted hope of getting through them all.

The chart below shows the number of temae I have performed each month going back to 2002. I’m thrilled that my numbers have soared as a result of my Morning Tea project. Now that I make Tea every day, I have occasionally performed one temae over and over again to improve my mastery of it. Still, most days I do a different temae than the day before.

One of the reasons that I keep changing temae often, is that I am easily bored. Especially if I do the easier temaes several days in a row, I find that I just don’t enjoy the experience as much. Ryakubon has been a victim of just that. When travelling, I usually bring dogu for either ryakubon or chabako. If I bring ryakubon dogu, there is no variation in the temaes no matter how long the trip lasts. Often, I get restless to try a different temae pretty soon.

I do have some temae “streaks” where I have kept with the same temae over longer periods. If you look at the next table (showing my longest streaks) you’ll quickly realize that for me, variation is important. Most of the streaks I do have, are part of my morning tea project.
So, to answer my curious reader: By changing temaes often, I ensure that I’ll do (almost) all of them each season, and it also helps make the Tea experience more varied and enjoyable. 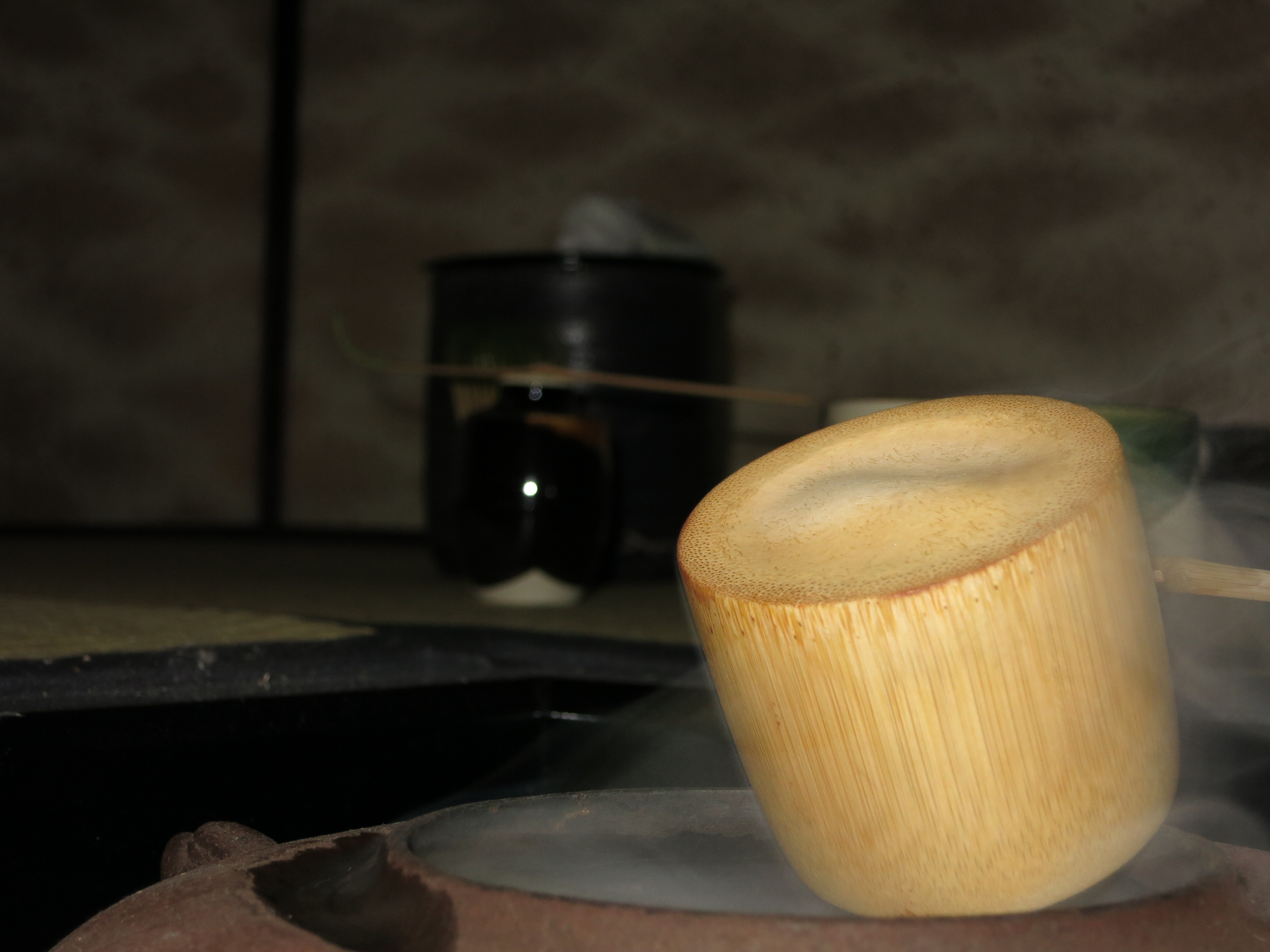 When I visited Warsaw I was inspired by my teachers story of dairo to try gyakugate again. I rearranged my room, having
made two cuts for the RO it was quite easy. Just had to lift up all the tatamis and shift things about. After five minutes my room was all changed.

It was strange sitting on the opposit side of the room. One of the first things I notice was that the room has much less “decorations” on one half than the other. The part which the host usually can see is quite decorated with the tokonoma, a window, and some white birch pillars. While the wall to the left and in front of the host is just a plain wall with only one small window between them. I had not thought about this before I was looking at the room from gyakugate perspective. Neither was it planed that way. The thing is that what I can see from the gyakugate temae-za is much the same that the guests will se in a regular temae. So in other words I have made a room in which I’m forcing the guest to sit with their back to the most interesting part of the room. This is something I should take in to consideration if I’m ever designing a new tea room.

It was a bit of a mental challenge to remember all the different things that changes during gyakugate. It does not help that it has been 7-8 years since I last did it. After a few attempts I feel I got the hang of it again. I should probably do this at least one week every year. It would be nice to try it in February. Since that is the dairo-month and dairo is always gyakugate. According to one of my senpai having the guest on the left side used to be the regular style, and it was Rikyu that wanted to be different and had everybody on the right side. Not sure if it is true, but it is a funny thought non the less. 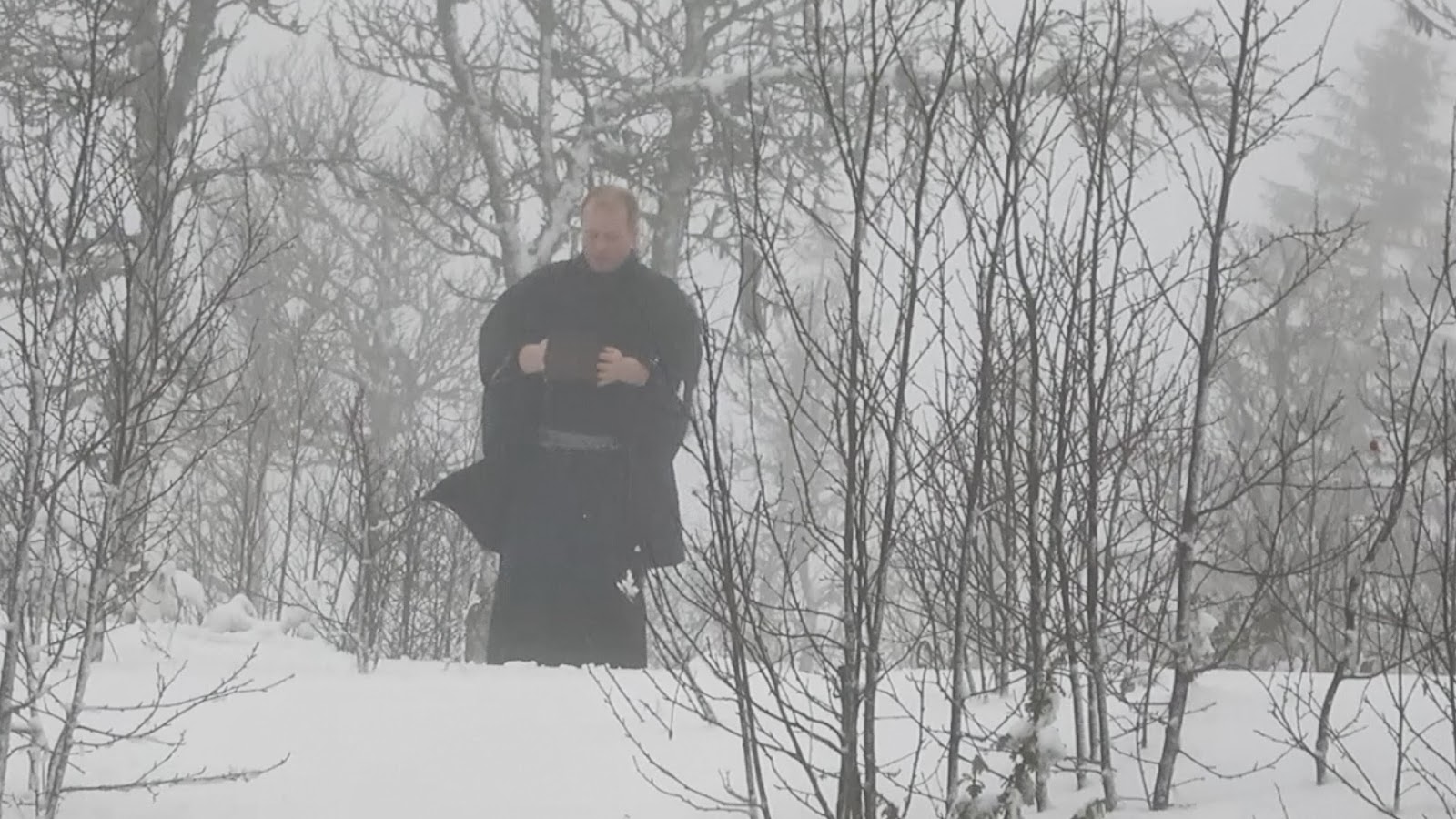 I wanted to make a movie of Yuki temae outside during the winter. I got help from my sister and brother to do the filming, and decided to give it a first try on christmas eve. We rigged a temae-za with goza and a binkake. Even has proper charcoal burning under the tetsubin.  In the hast of preparation I had forgotten to make sure that all the cameras had been fully charged. So one after another they ran out of power. Only one camera lasted through the temae. The camera that lasted was the one filiming the details so it is not possible to make a good movie.

I expected this to be a very cold temae, but it worked out nicely for everything except the toes. I managed to get the tabi wet prior to the temae, and in the wind the wet tabies did not offer much warmth.

Another important lesson is that the snow under the goza has to be packed hard and be flat. I had been a bit too slopy about it this time. The chawan kept sliding on the laquer board because it ended up on a “slope.”

I hope for more success next time, in the mean time I can share some of the frames from the movie we got.