Today was a big day. Both the tatamiand the dogu from Zuiun arrived. The tatami looks and feels perfect, and has the unmistakable smell of new tatami. When placing them out I noticed that I have some small irregularities in the dimension of the room. Fortunately I have made it too big and not to small. Nothing that a small piece of wood will not hide. The tatami is super heavy. Each full mat is 37kg. It was nice to see that the measurement for both the regular ro placement and the gyakugatte placement was done correctly. I was a bit nervous about that.

The dogu from Zuiun finally arrived. For some reason the second box used 13 days from Osaka to Oslo while the first only 3 days. They were sent the same day as part of the same shipment  go figure. Then the second box got stuc a few extra days in the Norwegian custom because of a missing shipping manifest. I sent them the Japanese order confirmation and a copy of my bank statement, but that was not good enough. The needed to have the manifest translated too. Delaying the custom clearance a few extra days. I do not understand this, I have had many many shippments of dogu and never had trouble with customs. When I finally got the package today it was clearly marked as “Tea Ceremony Utensils” and had a value stated in Yen. Anyway, now I got the dogu and I’m really happy about that.  I had done a few mistakes when I orderes. Since I can not read the catalouge, but is just looking at the images I have apparently ordered chabako chawans instead of regular sized 😛
It was a very nice feeling to enjoy koicha using brand new tatami, chawan and chaire. Now the room is all but complete. I just need to finish up some minor details and get hold of the blue and white paper that is suppose to go on the bottom part of the wall. Not to mention figuring out what to do about that door that is super hard to open and close.

The building activities has mostly been on hold for the last few weeks. I tried to make a new door last week but ended up cutting the wood 4mm to short. I’m hoping to be able to buy new wood tomorrow and give it another go this weekend.
Today is Ascention day, a public holiday in Norway, so I had some time to make covers for the ro openings in preparation for the furo season and the arrival of my new tatami. Actually the tatami should have been here by now, but I haven’t heard anything from the shop.
Zuiun sent two boxes of dogu for me. For some odd reason only one have arrived. They were shipped the same day from Kyoto, but apparantly one of the boxes is still in Osaka 🙁 The package that arrived contained my very first furosakibyobu. See the image above. These are surprisingly expensive. I paid $298 plus shipping for this one, which was one of the cheaper I could find.
As you can se I’m still using my okiro kama for the furo season. This is soon to change. I have a system where a friend borrow my ro kettle during the furo season and the furo kettle during the ro season. Just need to make the swap. 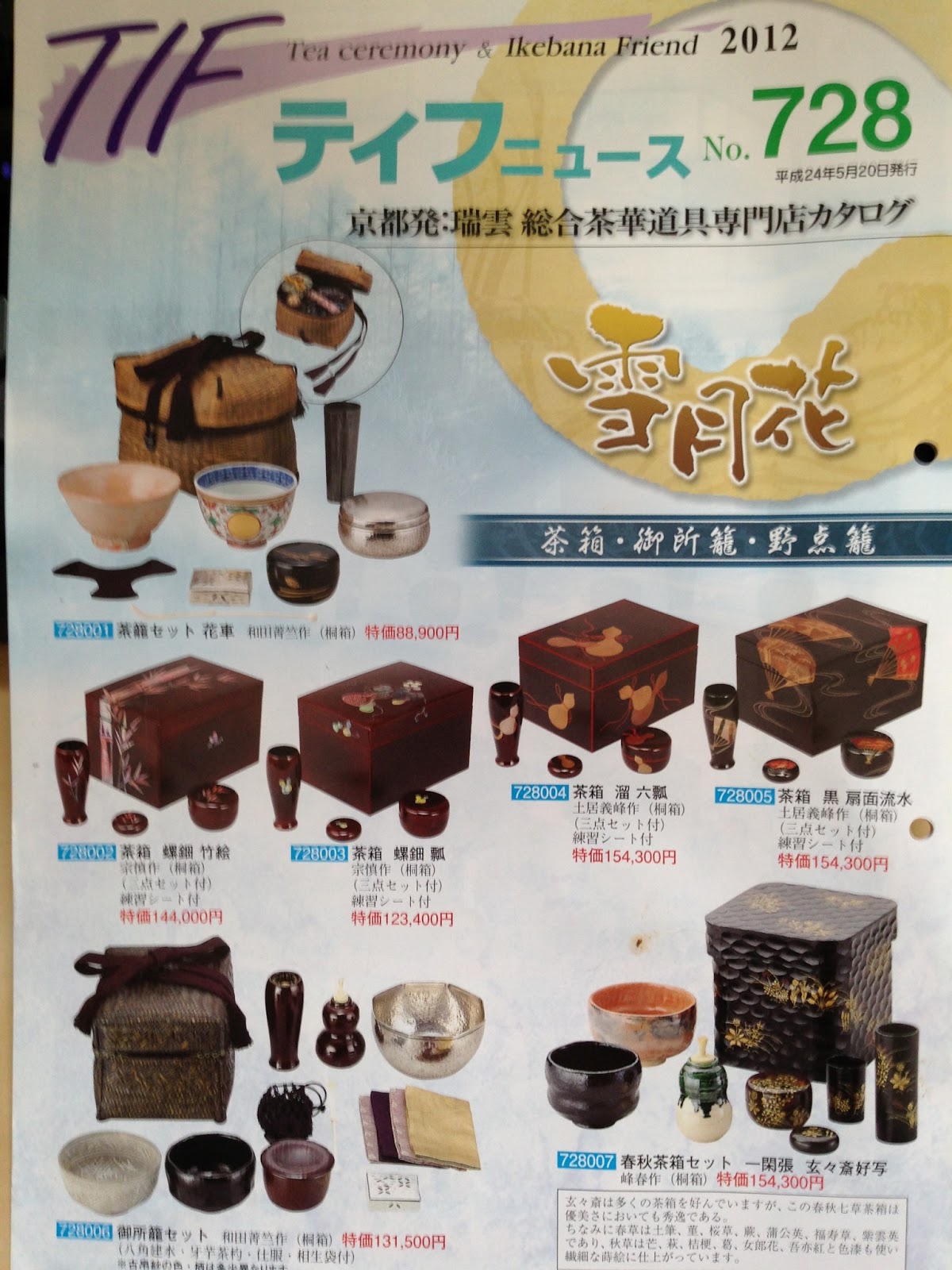 As you walk the path of Chado and learn more, most people eventually want to acquire some utensils of their own. There are tons of web site that sell the basic, chawan, chasen, chashaku and chakin. However once you start looking for anything outside the basic things get trickier. I have found a few English web sites that do sell dogu. However, the do usually not have a very good selection and their prices as also usually much higher than the stores in Japan.

I do neither read nor write Japanese so I thought it would be impossible to order dir
ectly from Japan. With help from a friend in Japan I got Zuin to send me a bunch of catalogues. I guess I could have tried to contact them directly about that, but I did not.
I wrote them a minimalistic order, with as little English as possible:
:

I sent it on e-mail to the shop. Two days later I got two PDF’s in return and a short e-mail. The first PDF was payment instructions. Luckily these were in English. Second PDF was a quote for the items. Some of my catalogues were quite old and the prices were apparently outdated. I made changes to the order PDF as they had done some mistakes. For instance they had not understood that I wanted several of some items. Also I used the PDF to chose among the three shipping methods they had lined up, and to remove some items that I thought got to expensive with the new prices. Then sent them back the PDF. They quickly updated the PDF and returned it the same day.

Looking over the order I was quite happy. The payment instructions was easy to follow. Three days after entering the money transfer into my internet bank I received a confirmation that the money had been received and that the order would be shipped immediately. Indeed the day after I was informed that the order had been shipped. Now I’m anxiously awaiting my new dogu’s arrival.

In summary ordering dogu from Zuiun directly seems to be possible even if you do not speak Japanese. You might have to go trough ordering the catalogues first. They do however post some of their catalogues online, see here for one excample. Also I found google translate a usfull tool for browsing the Zuiun web page.